Wizkid And Tiwa Savage Share a Kiss On Stage 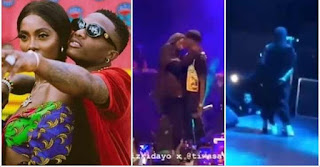 Main Latest Photo News LATEST PHOTO NEWSNIGERIA ENTERTAINMENT NEWSGISTNIGERIA MUSIC NEWS
Wizkid and Tiwa Savage share a kiss on stage 2 minutes ago by  Caroline Yaakugh Social media is currently buzzing with reactions following the recent video of Nigerian music stars, Wizkid and Tiwa Savage getting really cozy on stage.
The speculations about the true nature of the relationship between music sensations, Tiwa Savage and Wizkid remains a hot topic on social media.
Currently trending on social media are video clips of both singers performing at a show in France, which has left social media convinced that the relationship between them is in fact more than platonic.
In one of the videos, the two can be seen hugging in a not-so-casual manner as Wizkid’s hands can be seen boldly touching her derriere. In the other video, the singers take it up the notch by actually locking lips on stage.
The video clips which has since gone viral on social media, has left quite a number of fans excited over what they believe is a blossoming relationship between two of Nigeria’s most hottest musicians
Meanwhile, trailing the heels of the success of the Starboy Fest is yet another impressive one! Nigeria’s very own Wizkid has been nominated for the 2019 Soul Train Awards.
The singer who made it to the list for his collaborative song with American music star, Beyoncé, Brown Skin Girl. He has been nominated in two categories: Best collaboration and the Songwriters award.
Share
Man City Star Raheem Sterling Equal With Messi's 36 Goals In Calender Year Previous post
[News] Naira Marley’s Case In Court Stalled After Lawyers Reportedly Quarrel Over Seat Next post