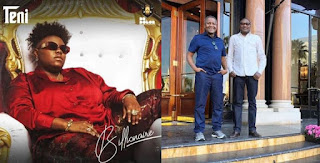 Popular and multiple award winning Nigerian singer, Teniola Apata, who is popularly known by her stage name, Teni the Entertainer, has explained why she mentioned the names of popular people in her songs.

Recall that Teni has mentioned the names of billionaires, Aliko Dangote and Femi Otedola, in a couple of songs which some people have suggested she did in an attempt to receive money from the billionaires.

Explaining why she mentioned their names in her songs, Teni told Punch in an interview that she incorporated their names into her songs so that people could relate more with the billionaires. She said; “I grew up being exposed to a lot of culture and one essential part of that is praise-singing people.

I decided to incorporate that practice into my songs so that people could relate more with them.” Contrary to opinions in some quarters that Teni mentioned Dangote and Otedola’s names in her recent song titled ‘Billionaire’ to get money from the two business men, the singer said, the song was meant to encourage people to live their best lives.

“This project basically encourages people to lead their best lives, achieve their dreams and generally enjoy what life has to offer. No doubt, life has its challenges, but sometimes, one just needs to take a break and enjoy it,” she said.