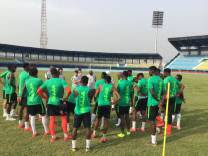 Super Eagles have been handed a major boost ahead of their international friendly clash with Brazil on October 13 in Singapore.
Rangers midfielder, Joe Aribo is in contention for a starting role in Gernot Rohr’s squad against the Selecao after he recovered from a fatal head injury.
DAILY POST had reported that Aribo sustained a head injury during Rangers’ 1-0 victory over Livingston in the Scottish League Cup last month at the Tony Macaroni Arena.
The 23-year-old was caught by an elbow from Livingston defender, Ricki Lamie which left him with blood pouring from his head. He was later substituted.
However, Rangers manager, Steven Gerrard has now disclosed that Aribo, who has missed Rangers last two games might make a return for the clash against Hamilton Academical in the Scottish league at Ibrox Stadium on Sunday.
“Joe Aribo has a small outside chance of being involved at the weekend, but we will make that decision later,” Gerrard told reporters at his pre-match press conference on Friday ahead of Rangers’ clash against Hamilton on Sunday.
Aribo made his international debut for Nigeria in a 2-2 friendly match against Ukraine in September.
Share
[Finance] Central Bank Of Nigeria Deducts 500 Billion From UBA, GTB, ZENITH BANK ETC Previous post
[Music] Mattyblinx & Ayzee – Blow My Mind Next post