We9ja HubOctober 18, 20190 Comment030
EFCC VS MAPOLY: MAPOLY Students Clash With EFCC After Allegedly Tarnishing The Image Of Their Institution. 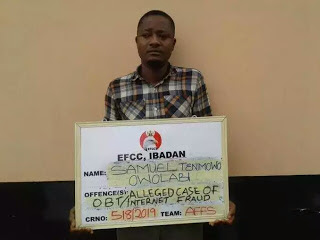 Hours after a HND student of Mechanical Engineering of the Moshood Abiola Polytechnic (MAPOLY) was paraded by the Economic and Financial Crimes Commission (EFCC) for online fraud, tens of twitter users have stormed the page to mock the anti-graft agency as the said institution does not offer such course.
In a statement released by the Economic and Financial Crimes Commission (EFCC) on Wednesday, October 16 revealed that the convicted online fraudster was favoured by the judge as he “had missed two examination sessions owing to the criminal charge filed against him.
The EFCC statement reads in part:
“Cybercrime: MAPOLY Student Jailed, Two Others Arraigned in Ibadan. A Higher National Diploma (HND) Mechanical Engineering student of Mashood Abiola Polytechnic (MAPOLY) in Ogun State, Olalekan Oladapo Ogunremi, was on Wednesday found guilty of criminal impersonation”. 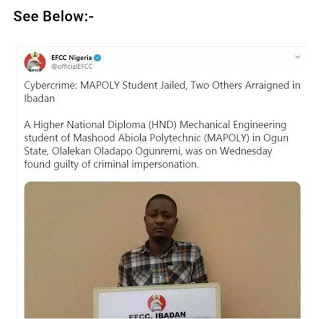 Meanwhile, Twitter users who slammed the anti-graft agency stated that there is no HND programme in Mechanical Engineering.
Share
[Gist] I'm 3 Month Pregnant – Simi Previous post
[News] Sad A Man Was caught trying To Steal A Pant At Ibbul – Must Read Next post