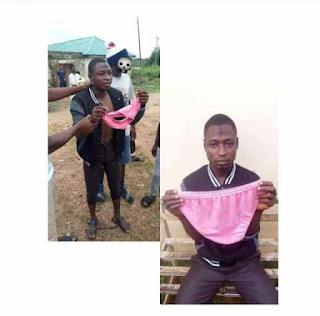 The photos there was a man caught trying to steal a  pant from from a lodge called Abuja lodge,  at the Ibrahim Badamasi Babangida Lapai.
Farewell the man was caught at the right point of him trying to steal the pant at a ladies window, which she saw him and shouted thief this brings massive gathering and they began to chase him and unfortunately he was caught. Further questioning goes to him and he said he’s  a student of “IBB University” and from the Department of Counselling Physiology.
He claimed he’s a student but not recognize by any student or the school management.
The school management was furious and has to intervene and been taken to the School Security Unit for further investigation before handling to SARs.
Share
[News] Sad As EFCC Continue To Raid Mapoly Students – Must Read Previous post
[Music] Diaze Ft. Patrick & Challex D'Boss — Money + Repete || @officialdiaze Next post