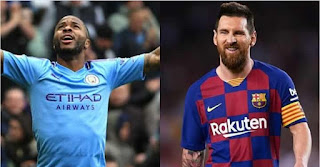 Raheem Sterling was on target for Man City in their 3-0 win over newly-promoted Aston Villa – The 26-year-old is now level with Barcelona’s Lionel Messi with 36 goals in a calendar year –
Sterling has scored 13 goals in 14 appearances for Pep Guardiola’s side in all competitions Raheem Sterling’s goal in Man City’s 3-0 win over Aston Villa at the Etihad, now draws him level with Barcelona’s Lionel Messi with 36 goals in a calendar year.
The England international scored the opener for City as he put the ball through Tom Heaton’s legs to score his 36th goal for club and country in 2019. Sterling took his tally to seven in the Premier League and his 13th in 14 appearances in all competitions this season.
Pep Guardiola compared the Englishman to Brazil’s prolific goalscorer Romario in his book and commended his ability to attack and defend in his book. “He’s a guy whose physicality is incredible, he is so strong,” Guardiola said. “A day after a game, he could play another game. His regeneration is incredible. “He can play both sides, he’s fast and defensively he helps us a lot.
He is an extraordinary player.” Man City have now closed the gap on rival Liverpool to three points as the Reds welcome Tottenham to Anfield.
It was earlier reported that Nicolas Pepe has found the net on dead-balls situations for Arsenal than Cristiano Ronaldo has for Juventus. The £72miliion summer signing from Lille has been struggling to make an impression since his summer arrival but proved he is worth every penny the Gunners spent on him.
Share
22Savage - Cubana (Mp3) Previous post
Wizkid And Tiwa Savage Share a Kiss On Stage Next post