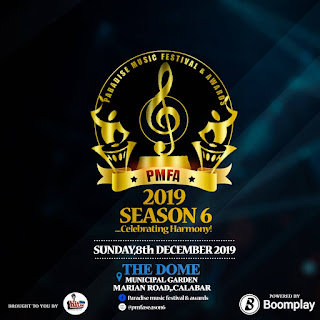 As organizers announce Season 6 award detail !
The organizers of the annual music awards, Paradise Music Festival & Awards (PMFA) have officially announced the date for the 2019 edition of the awards which is scheduled to hold on Sunday, December 8, 2019.
According to the release signed by the Project Coordinator, Nelson NseAbasi and made available to journalists, the venue will be the magnificent DOME, located on Marian road inside Calabar Municipal Gardens and has played host to top notch events/concerts in the state.
” This year, we have concluded a strategic partnership with urban lifestyle radio station, Hit FM and Africa’s biggest digital music streaming platform,  Boomplay to make the ceremony glamorous and the award rewarding”, the release partly reads.
“The theme of PMFA Season 6 is ‘Celebrating Harmony ‘ ; the combination and collaboration of simultaneously released musical works by various talents to produce a pleasing effect for a vibrant industry in the state – region. Also celebrating the migration of our musicians from analog to digital. The last year has seen many Cross River  artistes contest favourably with their counterparts in the main stream, while many of them have performed on big stages at home and abroad”, the release stated.
Speaking further, Mr Nelson said PMFA remains the most celebrated, most consistent and prestigious musical awards in the South of Nigeria. Following this announcement, the 2019 Nomination List for competitive categories will be published subsequently on the website for creative works released within the period under review (December 2018 –  September 2019).
#Anticipate
#PMFASeason6
#PMFA2019
#DigitalEntertainers
#CelebratingHarmony
#OnlyInCrossRiver
#MadeInCalabar
Share
“Davido’s Son Arrives The Day He Sexually Harassed Me – Kemi Olunloye Previous post
[Music] Davido Ft. Popcaan – Risky Next post