Currently trending on social media are photos of an elderly woman spotted outside a clothing store, begging a mannequin for money.

Our Manifesto: This is what YEN.com.gh believes in It is no news that the level of poverty in Africa continues to increase at a disturbing rate and this has contributed to the number of beggars roaming the street.

Regardless of this reality, there are still some cases that are rather heartbreaking. One of such is the case of an elderly woman sighted begging in front of a clothing store

in Nigeria. In the photos which have been circulating the internet, the elderly woman is pictured not begging an actual person but a mannequin placed outside the store used for displaying clothes.

It is safe to say she lacked the ability to discern the differences between the mannequin and a human being. 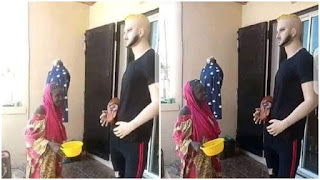