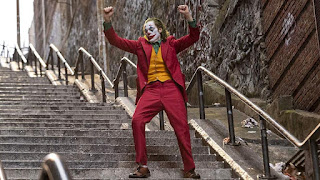 x
Joker has earned $571 million overseas, more than Batman v Superman, for an $849 million global cume, which is just under Venom’s $856 million cume.
On Thursday, Joker passed Deadpool and Deadpool 2 to become the biggest R-rated movie of all time in global grosses. On Friday, it passed $800 million worldwide to become, well, the first R-rated movie to hit that benchmark, save for China’s unrated (but ultraviolent) Wolf Warrior 2 ($854 million in 2017). And today, Joker has topped the box office in its fourth weekend after dropping to second place last weekend, making it the top movie of the weekend, for what that’s worth, three out of its first four weekends. That’s as much about the competition, especially in this quiet weekend, and about Maleficent: Mistress of Evil’s failure to breakout, as it is about Joker. Still, the numbers speak for themselves.
Joker earned $18.9 million (-35%) in weekend four to bring its domestic cume to $277.584 million over 24 days of domestic release. That puts it, sans inflation, just about Gravity ($274 million in 2013/$303 million adjusted-for-inflation) to make it the biggest domestic grosser in October history. Once it passes Meet the Parents ($166 million in 2000/$278 million adjusted), Gravity and Look Who’s Talking ($141 million in 1989/$320 million adjusted), it’ll be the biggest October release even with inflation. Barring a fluke in either direction, it should end up $315-$320 million domestic. Will it continue to be the buzzy movie (for adults and older teens) of choice even after Terminator: Dark Fate, Doctor Sleep and Ford v Ferrari provide adult-skewing options?
Will it play a big role in the year-end awards race, or was its triumph at Venice something of a fluke? Joaquin Phoenix is probably going to get an Oscar nomination, and I still maintain that the film will stick around if only by virtue of its huge box office and relatively decent reviews. A lot depends on how well the rest of the Oscar line-up performs. If Ford v Ferrari, 1917, Jojo Rabbit, Bombshell and Little Women don’t really connect (or don’t breakout beyond limited release), then Joker will arguably end up toe-to-toe with Once Upon a Time in Hollywood, Rocketman and whichever Netflix movies (The Irishman, A Marriage Story, etc.) end up moving to the top of the pack.
Joker is a stunning victory for Warner Bros., Village Roadshow and related parties, as it has earned another $47.8 million overseas, down just 38% even as Terminator: Dark Fate opened in a handful of overseas markets. That gives it a $571.5 million international cume (bigger than Batman v Superman’s $543 million overseas total) without a penny from China, for a $849 million global cume, just shy of Venom’s $856 million cume to become the biggest Fall release ever. If the official $55 million budget is accurate, then Joker has passed The Mask ($350 million from a $23 million budget) to become the most profitable comic book movie ever. If the budget is closer to over/under $62 million, then it’ll still be there once it passes $950 million two weeks from today. Either way, it might get awfully close to $1 billion without China.
Share
[Music] Akon ft. Olamide – Scammers Previous post
IPPIS: ASUU Threatens With no Pay, no Work Next post