Anthony Joshua is the 10th richest boxer with £40m, Mayweather ranked no. 1 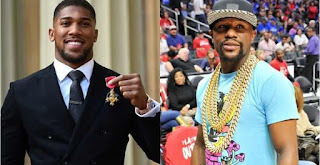 Anthony Joshua is 10th richest boxer with £40m, Mayweather ranked no.1 21 hours ago 14555 views by  Akan Anwankwo Anthony Joshua is the tenth highest earning boxer of all time and is net worth £40million, according to a recent study.


The likes of Mike Tyson, Floyd Mayweather, Wladimir Klitschko, Canelo’ Alvarez and Manny Pacquiao are also included in the rich-list.


Joshua will face Andy Ruiz Jr in a bid to reclaim his IBF, WBA, and WBO belts on December 7, in Saudi Arabia.


According to talkSPORT, here are the top ten highest earning boxers and their net worth.

Joshua has  sponsorship deals with the likes of Lucozade, Dre Beats and Under Armour and his net worth would rise if he defeats Ruiz in his coming fight.

Wladimir reigned in the heavyweight division for almost ten years and his sponsorship deals with Hugo Boss and several German companies earned him a spot in the top-ten.

Alvarez’s recent £365m deal with DAZN in 2018 after parting ways with HBO takes his earnings to £73m and a win over light-heavyweight king Sergey Kovalev will earn him more money and become a four-weight world champion.

Leonard won five weight divisions and is regarded as one of the greatest boxers of all time.

Pacquiao pocketed a reported £93m when he fought Mayweather in the ‘Fight of the Century’.

The head Golden Boy Promotions’ fight against Mayweather was the biggest boxing pay-per-view of all time until Mayweather vs. Pacquiao.

The former heavyweight champion made a huge chunk of his fortune from selling the naming rights to the George Foreman grill, in a deal worth a believed £138m in 1999.

Mayweather tops the list with a net worth of £435m with a 50-0 record and his mega money Las Vegas showdown against UFC star Conor McGregor fetched him a cool £214m.